Usually I think of an idea by Tuesday and just can't get it done in time for Thursday night. Maybe I would do better if it was Illustration Fortnight!

For last week's theme was "beginner" and the idea came very naturally - a young bird learning to fly. I didn't have a particular bird in mind when I sketched him, but he came out a sparrow! 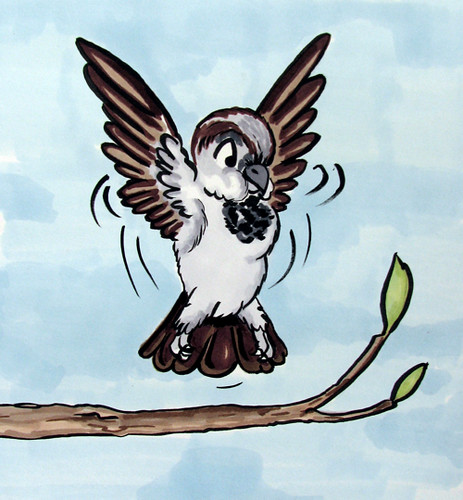 Every now and then a topic on Illustration Friday is enough to get me moving as fast as possible, but the past week was ridiculously busy and a week just wasn't enough time. I doodled the idea at work on Friday but didn't get around to actually drawing it until Sunday, and then with two out of four evenings occupied, there wouldn't be enough time to colour. So I took what I had, added some filters to it (ugh!) and posted away. I can't wait to finish the actual picture. It's really going to be nice, and have no filters!

Remember this? Illustration Friday on Livejournal at

illofriday ... I want to bring this back!

This week's topic is STRONG.

First thing ... I have not posted in this community since forever. I have been rather busy and creatively dead. I am trying to make time to draw again, so I am using Illustration Friday and

Second thing ... the subject of this image. I wanted to do a iconic symbol that showed strength. Atlas came to mind. However, I wanted to do something different. I tried to think about what in modern day history would be a large burden to bare on poor atlas's shoulders. I must admit that I have not been listening to the news everyday, but the economy and Obama's health care plan came to mind. I am not sure if this now mean I am for or against Obama's health care plan, but just saying that it is big and big news.

Third thing ... I was looking up wikipedia and found out that the whole iconic image of Atlas holding up Earth on his shoulder is wrong. Apparently, there was two Atlases and their stories have gotten mixed up.

"The origin of the term atlas is a common source of misconception, perhaps because two different mythical figures named 'Atlas' are associated with mapmaking.
• King Atlas, a mythical King of Mauretania, was, according to legend, a wise philosopher, mathematician and astronomer who supposedly made the first celestial globe. It was this Atlas that Mercator was referring to when he first used the name 'Atlas', and he included a depiction of the King on the title-page.
• However, the more widely known Atlas is a figure from Greek mythology. He is the son of the Titan Iapetus and Clymene (or Asia), and brother of Prometheus. Atlas was punished by Zeus and made to bear the weight of the heavens (the idea of Atlas carrying the Earth isn't correct according to the original myth) on his back."

( What is that symbol on Atlas' back?Collapse )

It's been ages since I did an entry. When I think "breezy", I think of horses and blue! It's also another chance for me to do some papercutting. I want to do this horse in other colours, especially since I have some new X-acto blades. Nothing is worse than cutting with dull blades!

Just wanted to say I made a full size painting from a little sketch from an IF back in...2007? Yikes! How time does fly.

This is probably the most involved painting I have undertaken. Click the painting to see a larger image and more detailed explanatoin. I was quite pleased to finish it today. Here's the in-progress pictures with the original IF picture.